Good News– We have a name for the jerks/startles/hiccups that have been affecting Kelsey the last three months.  They are called Infantile Spasms.  Yesterday, Kelsey had an EEG at Hopkins to find this out.  She did very well with all the electrodes on her head.  She even slept before the technician was finished putting them on and for a good bit of the monitoring. 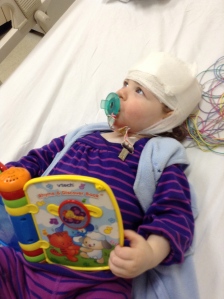 Bad News– They aren’t as benign as our pediatrician and developmental optometrist made them seem.  Kelsey is having a good bit of seizure activity.  While it’s good to have answers, I HATE having ANOTHER diagnosis for her and our family.

Good News-Seizures are very treatable.  The neurologist we added to our docket yesterday prescribed prednisolone.  It’s the liquid form of prednisone that most of us are familiar with as a steroid.  She will be on a high dose of the steroid for a month.  That’s it.  The prednisolone should stop the seizures pretty quickly if…

Bad News-…it works.  While treatable, seizures aren’t predictable.  You may have noticed I referred to the spasms as “infantile.”  But Kelsey is one month shy of two years old.  She hasn’t been an infant for awhile.  It is abnormal to have these types of spasms at her age.  I swear.  Our “luck” on this stuff is incredible.  So, the doctor isn’t exactly sure the steroids will work.  They usually do, but Kelsey’s case isn’t usual.  Awesome.  If the steroids don’t work, we will know pretty quickly.  We should see them stop within two weeks after diminishing rapidly.  There are many other seizure drugs that we can try if this doesn’t work (but they all come with their own side effects so I’d rather not get to know them.

Bad News–Steroids can cause some unpleasant side effects.  She will be on them for a short period of time, but it’s a high dosage, so we shall see how it all presents itself.  We were also given Zantac to be taken twice a day to help treat the upset stomach that she may experience.  And, we were told that irritability can also be a side effect of prednisolone.  NOOO!!!!  Remember, my recently very sweet baby just had a 10 month bout of irritability.  I’m really hoping that the doctor’s definition of irritability is different than our very real experiences with recent irritability.  The girl we spent all day with at Hopkins who was charming people left and right and smiling, laughing and flirting to get our attention makes this new pill a little easier to swallow.  I’m very scared of irritability.  But, the doctor assures me it’ll “only be for a month.”  Fingers crossed.  Sleeplessness and an insatiable appetite are other side effects.  Just what every mother-of-a-toddler wants to hear…sleeplessness.

Good News-I guess there is more…I’m easily distracted to focus on the negative.  The doc said that kids with seizures also experience delays.  Yep.  Kelsey is delayed in many areas.  But, after the seizures stop, development starts to pick up again.  I’m looking forward to some new milestones.  We’ve been “stuck” for many months at a certain level, despite our some times four therapy sessions a week.

Bad News-Once we stop the seizures, it doesn’t mean we’ve stopped them forever.  And this is the scariest news.  The unknown.  Once someone has seizures, the likelihood of them developing again is there.  And if they are exactly the same type of seizures as she’s having now, we can treat the same way.  If not, we’ll have to try something different.  A seizure can look like the jerks Kelsey is having, or they can present in a very wide array of displays.  She could “just” stare off in space, for example.  But all of it is a pause in brain activity (my own understanding).

That’s it for now.  I tried to end on a high note, but it just didn’t happen.  Please keep us in your thoughts and prayers.  We still need ’em!  We will be making lots of trips to the pediatrician and hospital in the next month, so we will need strength and patience.  Thanks for all the recent love, as well.