Benjamin Patrick Larrick was born on September 19, 2007 at 7 lb. 3 oz.  He was two and a half weeks early and seemed perfectly healthy except for some jaundice.  On September 22nd we went to his first doctors appointment.  The nurse practitioner that saw Ben wondered if he might have an incurable, fatal disease called Menkes Disease, due to the characteristics of his hair. We were devastated.  Ben seemed perfectly healthy to us and we had only had him for three days.  We wondered how there could be something wrong??

We were sent to Children’s Hospital in Washington, DC to see a geneticist a week later.  It was agony waiting to find out the results of initial blood tests, wondering if the new love of our lives was sick.  The geneticist who saw him was encouraged by the fact that his hair wasn’t kinky under the microscope, a telltale sign of the disease…or so we thought.  We’d have to wait a few days for the blood test results, but we were happy with this fact.  A few days later the call came and we were elated! The copper levels were normal.  More waiting was ahead…it would take 4-6 weeks for the full genetic report, but the geneticist was pretty sure that we could breathe a sigh of relief.  We did, for sure!

We had all but forgotten about Menkes until the fateful day, October 30, 2007. Our world came crashing down.  The geneticist from Children’s Hospital called to tell us that Ben’s genetic testing came back positive for Menkes Disease or “Kinky Hair” disease caused by a copper processing deficiency.  We went to NIH the next day and spent the scariest Halloween ever with Dr. Stephen Kaler, the leading authority on Menkes Disease.  We were given copper histadine injections to be given to our baby twice daily, and sent home with heavy hearts and little hope.

We started working with a PT, OT, speech therapist and special educator once a week to keep him thriving…and boy did he! It was clear to us by 6 months that the copper treatment seemed to be working. Ben started sitting up, grasping toys, rolling over and showed signs of communication. Then, by a year old he was standing with support, playing with his friends, and beginning to use sign language. Sixteen months was Ben’s “golden month.” He started pulling up to stand and crawling! More milestones came…sometimes all at once and sometimes few-and-far-between. By 2 ½, Ben could walk unsupported, stand independently, crawl, and push himself forward and backward on a push car. He began saying his first words by 27 months. At 31 months, Ben was assessed at a 33 months level for receptive language. This was such a big reason for us to celebrate. It was a fact that he understood everything (and more) that a typical 2 ½ year old could.

When Ben was diagnosed on that very scary Halloween in 2007, we weren’t sure where we’d be today. The first statistic we read online was that many boys with Menkes don’t make it to their third birthday and most don’t see past the first decade of life. The oldest “thriving” boy with Menkes is 19. While we’ve always tried to live in the present and learn about Menkes from Ben vs. through research or the Internet, we definitely hoped for more than just three years with this precious little man in our arms. We hoped for birthdays, trips to the beach, first words and steps, school days, braces, winning games, recitals, graduations and weddings. We hoped for smiles and health beyond all else. We didn’t know what we’d see or go through…but go through it, we must.

Luckily what we saw was more than we could have EVER wished for. Ben took those first steps into our arms and we heard his first words. We felt the hugs and heard the laughs. We saw him clapping, dancing, playing, walking and living.

At almost seven, Ben can do all the things that were predicted to be impossible for him. He can walk, march, run, jump, walk up and down stairs by himself, kick a ball with both feet, play baseball and ride a bike. He can swim, dance, climb and swing. Ben is quite funny. He loves to make people happy and is very social. He can read and write and solve math problems. He has a very creative imagination and is very clever. Ben is quick to be loved by all who meet him.

In Ben’s seven years, he has never had a seizure (knock-on-wood).  Other than the common cold or flu, he has been completely healthy and happy little boy. Ben amazes us daily with his adorable personality. He is always smiling and laughing and happy. Everyday he becomes stronger, smarter and more lovable.

We realize we may have a little miracle on our hands and feel overwhelmingly thankful to God for this. We are also extremely thankful to that nurse practitioner, that we saw only that one time, who questioned whether Ben had the disease. We hope that only good things are in the future for our Ben and we feel so extremely proud and lucky to be his parents. 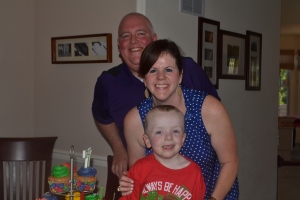